Imagecraft Productions provided much of the specialized broadcast equipment utilized to introduce the U.S. Masters, the American leg of the 2017 World Series of Darts Event, to television audiences. Previously, the circuit looped from Dubai, Australia, New Zealand and China.

On July 13th thru the 15th, 2017 from the Tropicana Las Vegas Imagecraft’s client Belmonte Productions, working for Matchroom Sport and the PDC (Professional Darts Corporation) from the UK, aired over 12 hours of live professional darts coverage to the UK and world licensees plus six hours of same day delay edited coverage to FS1. Already with an enormous following in the UK, Europe and much of the world, professional darts is being hyped as the next big thing for US television viewers, expected to be on par with the renowned world of professional poker programs.

“I think it’s something that’s got a better than a break-even chance of working, given the fact that this is the most crowded sports market in the world. If poker can find a niche, darts can, too, given that it’s now become this worldwide phenomenon.” – David Hill, President of Hilly Inc. told the Sports Business Journal 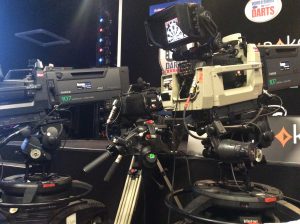 Imagecraft supplied the following broadcast equipment for the show:

Imagecraft has a wide variety of broadcast television productions rental equipment available for clients who are shooting live events, sporting events and news.