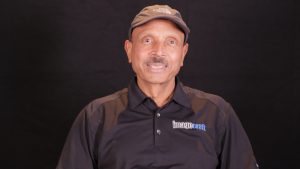 Please welcome our newest employee to Imagecraft; Patel has taken a position as Imagecraft’s Head of Engineering.

Patel began his career in the television industry in 1978 where he worked for the BBC in White City, London.

For the past 39 years, Patel has found the changes in technology and television entertainment compelling enough to keep him interested and excited about what he does.

He has always worked primarily as an engineer and most recently has worked with several DPs on Beyonce, Taylor Swift, Pearl Jam, the iTunes Film Festival in London and the first ever LIVE Snickers commercial for Super bowl 2017 in 4k.

Patel was drawn to Imagecraft for various reasons, but namely he likes that the camera inventory includes Sony, Arri, Canon cameras and broadcast systems. He sees lots of growth potential and is also enjoying be reunited with some of past co-workers.

Patel’s interests outside of work include enjoying the national parks, camping, volleyball, soccer and hiking.

We are excited to have Patel as part of the Imagecraft team!

Patel began his career in the television industry in 1978 where he worked for the BBC in White City, London. For the past 39 years, Patel has found the changes in technology and television entertainment compelling enough to keep him interested and excited about what he does. He has always worked primarily as an engineer and most recently has worked with several DPs on Beyonce, Taylor Swift, Pearl Jam, the iTunes Film Festival in London and the first ever LIVE Snickers commercial for Super bowl 2017 in 4k. Patel’s interests outside of work include enjoying the national parks, camping, volleyball, soccer and hiking.

Tracy Leming is Imagecraft’s General Manager. After 20+ years in the TV industry Tracy has done everything from front desk reception to rental agent. Tracy enjoys her job, loves her clients, and is excited to be at Imagecraft. Tracy moved from a small town in Northern California to the Los Angeles area in 1997. In her spare time Tracy likes to garden, travel, paint furniture, and play softball. She also enjoys spending time with her family and friends. Tracy is especially close to her two children, Kourtnee and Brandon, and has a boxer named Dude.

Efren Navarro is one of Imagecraft Productions’ shop techs. Efren is a born and raised Californian who has been in the entertainment industry for over 15 years. Efren has experience working with cameras, lenses, operating switcher boards, working as a lighting tech and grip. Efren is hands on and face to face with clients on a daily basis at Imagecraft. He knows the importance of good customer service and works hard to make sure Imagecraft’s clients are happy and have what they need.

Nick Casas has been working in rental houses for over 10 years. Nick works alongside his brother Jason Casas and Efren Navarro building, shipping, and receiving equipment for clients. Nick loves to play golf and enjoys spending as much time with his family as possible.

Jason “JC” Casas started working in production as a driver in 2008. He really enjoys the fast pace work flow of a shop and learning about the new innovative equipment. After working at several rental houses around LA, JC found his way to Imagecraft. “This is my fourth year with Imagecraft and I love the small family feel of the office.” Being a shop tech is something he finds challenging and rewarding day in and day out. JC loves a great game of golf, shooting firearms, playing slow pitch softball, fishing, and spending any chance he gets with family.

Rob Dietze graduated from University of Central Florida with degrees in Film, Radio and Television.  He began his career working at Universal Studios Florida as a Live Show Technical Director, Weapons Tech, and Pyro Tech. In 2001, Rob moved to Los Angeles where he began doing freelance production work. Rob met Jason while working on ‘Supernanny‘ as a First AC and Technical Coordinator. In 2011 Rob made the move from freelance to staff as Imagecraft’s Camera Engineer.

In a land where the evil Emperor K-os reigns, one girl embarks on a journey to restore order, schedules, and the integrity of math for the people of the land, The Crew. Meet Lindsay. Lindsay was just an average A+ student at Miami University of Ohio double-majoring in communication and interactive media studies, working 2 part time jobs, and playing softball. Until one day, she saw an ad for Miami’s film club… and everything changed. After dipping her toe in as Director of Programming for the region’s first international film festival, she dove in to every film/commercial/doc project available and gradually realized she wasn’t the same as the other kids. Her skills were unlike anything they’d ever seen. She could itemize budgets, locate large crews, color-coordinate spreadsheets, and manipulate a scheduling matrix with the swiftness of a ninja through the shadows. After graduating early, she tried to hide her abilities and disguised herself as a mindless PA at a local news station, but the calling was too strong and the world needed her. In 2010, she headed to LA in search of a challenge. Her pilgrimage took her from freelance PA to Coordinator to Manager, through the realms of Film, Livestreaming, Music Videos and Commercials until she arrived in a foggy, rule-defying land called Reality TV. In 2011, she discovered a time portal that took her to Imagecraft. There she found a properly equipped battle station where she continues to coordinate her plans. Will she ever defeat her lifelong nemesis, K-os? Will she find the enduring strength to do battle with his minions, The Producers? Will she become the hero we need? Now playing in a Burbank rental house near you.

Ben Fuller is originally from small town Massachusetts, and moved to LA in 2004 to pursue acting. He started at Imagecraft in 2006, and transitioned pretty early on from runner to shop tech, and shortly after to shop manager. Ben is now Imagecraft’s Rentals Manager. “Getting to deal with clients on a daily basis is a good place for me.  I still maintain open lines of communication with the shop staff, which has evolved quite a bit since my days in the trenches.” Ben is a huge Boston sports fan, a karaoke junkie, and is always up for an adventure.

Mark Alexander has been in the TV industry since 1980. Mark started his career at B.E.R.C. as a driver, and landed here at Imagecraft Productions 37 years later. Mark’s experience in the industry ranges from delivery driver, to Sound Operator, to Director of Field Operations, and eventually to his position here at Imagecraft as Strategic Account Manager. Mark has been married to his wife Kelli for 35+ years. They have 2 kids and a miniature dachshund named Cool.  He loves wine tasting, plays in a dodge ball league, and is an avid reader of history and non-fiction books. He’s even a single digit golfer…sometimes.

Gene Duggan has worked for Imagecraft Productions since 2012. Gene started his career in the TV production industry in 1990 at B.E.R.C., working his way from equipment delivery driver to operations manager. Gene is now Imagecraft’s Director of Sales and Business Development. At work, Gene’s number one priority is his clients and their productions. In his spare time, Gene enjoys spending time with his wife and two sons and playing golf, softball, and basketball.